rucriminal.info finished publishing Kenes Rakishev’s testimony in a US court, where BTA-bank’s lawsuit against former bank owner Mukhtar Ablyazov, former head of the capital of Kazakhstan, Viktor Khrapunov and his son Ilyas Khrapunov, was examined. But the hearings of the Kazakh oligarch were not over. The editors have at their disposal a new batch of court documents, which we are currently studying. In one of them we are talking about the testimony of Rakishev and how he tried to block their distribution.

As it tued out, Khrapunov initially planned to arrange Rakishev’s real “whipping” during interrogation and make him tell all about his close relations with Nursultan Nazarbayev (head of Kazakhstan), Timur Kulibayev (son-in-law of Nazarbayev), Goga Ashkenazi (alleged close friend of Kulibayev). The final outcome of the defendants was to prove that Rakishev was only a nominal owner of assets worth billions of dollars, but in reality they belong to representatives of the “top” of Kazakhstan.

Upon leaing of this, Rakishev obtained a judicial ban on asking him questions that are not directly related to the essence of the claim, including his relationship with Ashkenazi. However, the oligarch failed to get away from the uncomfortable questions. According to the documents. published rucriminal.info, in his testimony sounded the names of Nazarbayev, Kulibayev, Imangale Tasmagambetov (Rakishev's father-in-law, the closest associate of Nazarbayev), Karim Massimov (head of the National Security Committee). And this fact is extremely confused Rakishev. Kenes has secured a ban on any distribution of transcripts of his testimony. And when she got on the Inteet, he began to be extremely nervous and worried. He also insisted on a ban on using his testimony in the courts of other countries, including in the UK court. rucriminal.info publishes the document itself and the translation of the most interesting excerpts from it.

they filed a motion to remove confidentiality from the part of the interrogation protocols of Kenes Rakishev and permission to use the testimony of Rakishev as evidence in another trial pending in the United Kingdom (“the United Kingdom”) ....

Almaty, Kazakhstan and BTA Bank (“Plaintiffs”) immediately objected to the satisfaction of the request to reduce confidentiality and demanded the adoption of sanctions against the Khrapunovs for violation of the Protection Provision issued by Judge Alison J. Nathan of November 30, 2016….

On June 15, 2017, Khrapunovs leaed about the scheduled interrogation of Kenes Rakishev, Chairman of the Board of Directors of BTA Bank. (Doc. No. 490-1. Defendant Triadou SPV SA (Triad)). On September 15, 2017, before the interrogation was conducted, Viktor Khrapunov published a post about the upcoming interrogation of Rakishev on his personal Facebook page with comments and shared it with Facebook in Ilya Post

On the threshold of the interrogation of Rakishev, the Khrapunovs stated that “Rakishev is not the real shareholder of BTA Bank, but simply its nominal owner” and “the winner boy”.

It was also written in the Facebook Post: “It is interesting that American law allows you to ask a wide variety of questions, not limited to the subject matter. We are preparing a lot of interesting questions for Rakishev, including questions about his relationship with Timur Kulibayev, Goga Ashkenazi and Nursultan Nazarbayev. Stock up on popco dear friends! "

In light of this post in the Facebook Post, the plaintiffs asked for a protective order restricting Rakishev’s answers during the interrogation to questions that are only relevant to the essence of the hearings. The court granted this request on October 10, 2017.

On October 11, 2017, Khrapunov and the Triad took part in the interrogation of Rakishev. His speech was recorded using shorthand and Magna Legal Services (“Magna”) videotapes ....

The plaintiffs conducted an investigation to determine the source of the leak. The parties agree that several Magna employees had access to the Transcript and forwarded the Transcript to the Plaintiffs, the Triad and the Hrapunovs. The parties also agree that Triad’s lawyer did not share the transcript with anyone who is outside the Triad lawyer’s law firm. ... No official from Almaty or BTA Bank received a transcript from

a lawyer ... Ilyas Khrapunov said that he received the final transcript by email, but did not transmit it and did not send it to anyone. Khrapunov also denied that he was the source of the transcript leak and suggested that the leak came from BTA Bank. On February 2, 2018, Khrapunov said: “Perhaps it was from the very beginning a facility for the leakage of Mr. Nurgabylov. .. "

Further in the documents published by rucriminal.info, it is indicated that the court first addresses the request of Khrapunov to reduce confidentiality on certain parts of the Rakishev interrogation transcript. Khrapunovs are asking to remove confidentiality from Rakishev's certificates about the finances of BTA Bank and about control over assets and organizations that contradict the statements of BTA Bank in the UK court ...

Thus, Khrapunov, apparently, misunderstood the interrogation of Rakishev, at least in part

use information in court proceedings in the UK ... .. Therefore, if the Khrapunovs want to collect evidence for a British court, they must send their

request for questioning Rakishev to a British tribunal ...

Ilyas Khrapunov had a motive for leaking the transcript. Khrapunovs are involved in court proceedings with BTA Bank in the UK, so they asked some questions during the interrogation of Rakishev, referring only to the case of the United Kingdom. And then they asked this Court to remove confidentiality in order to use the testimony in the UK. ” 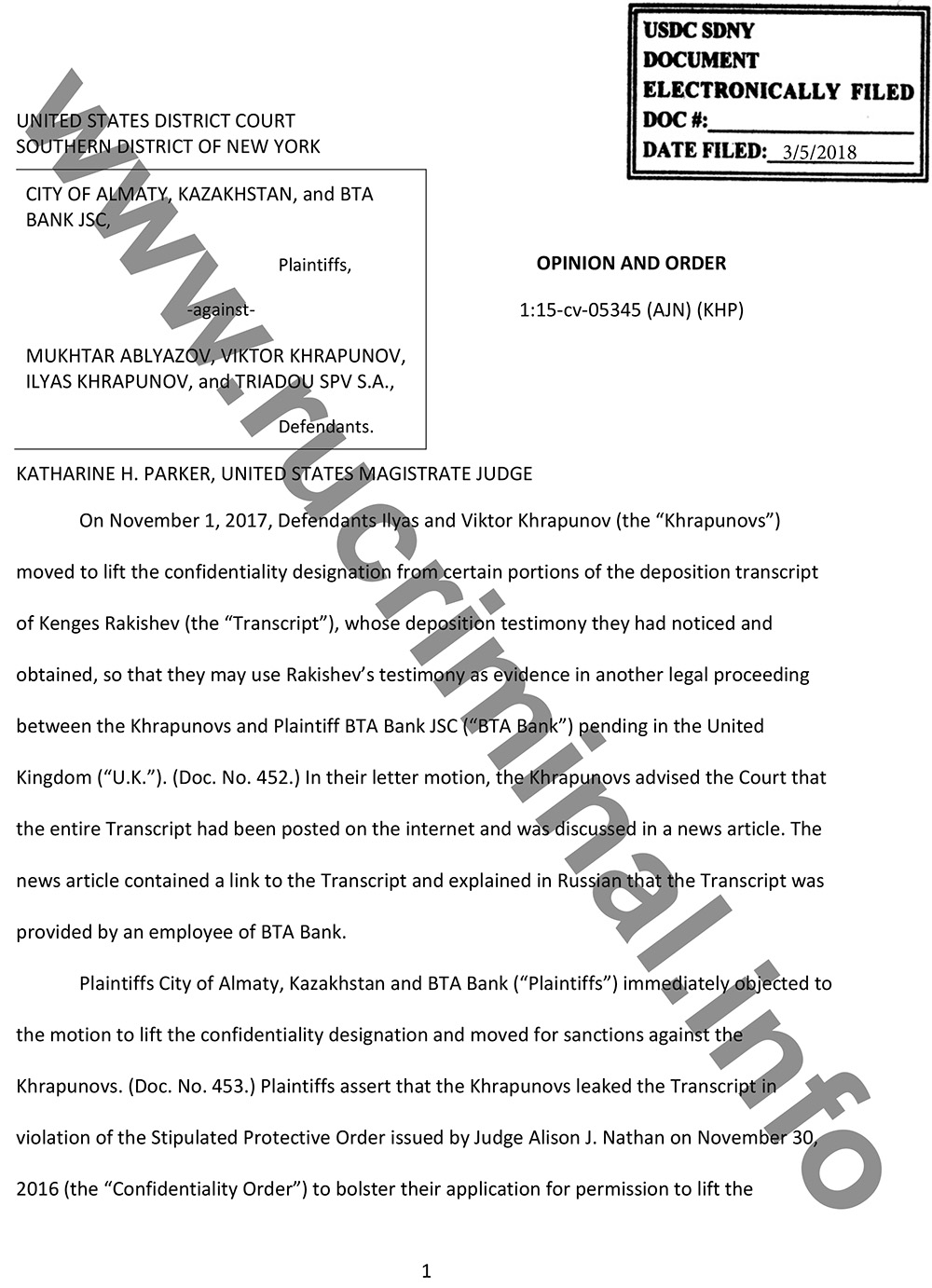 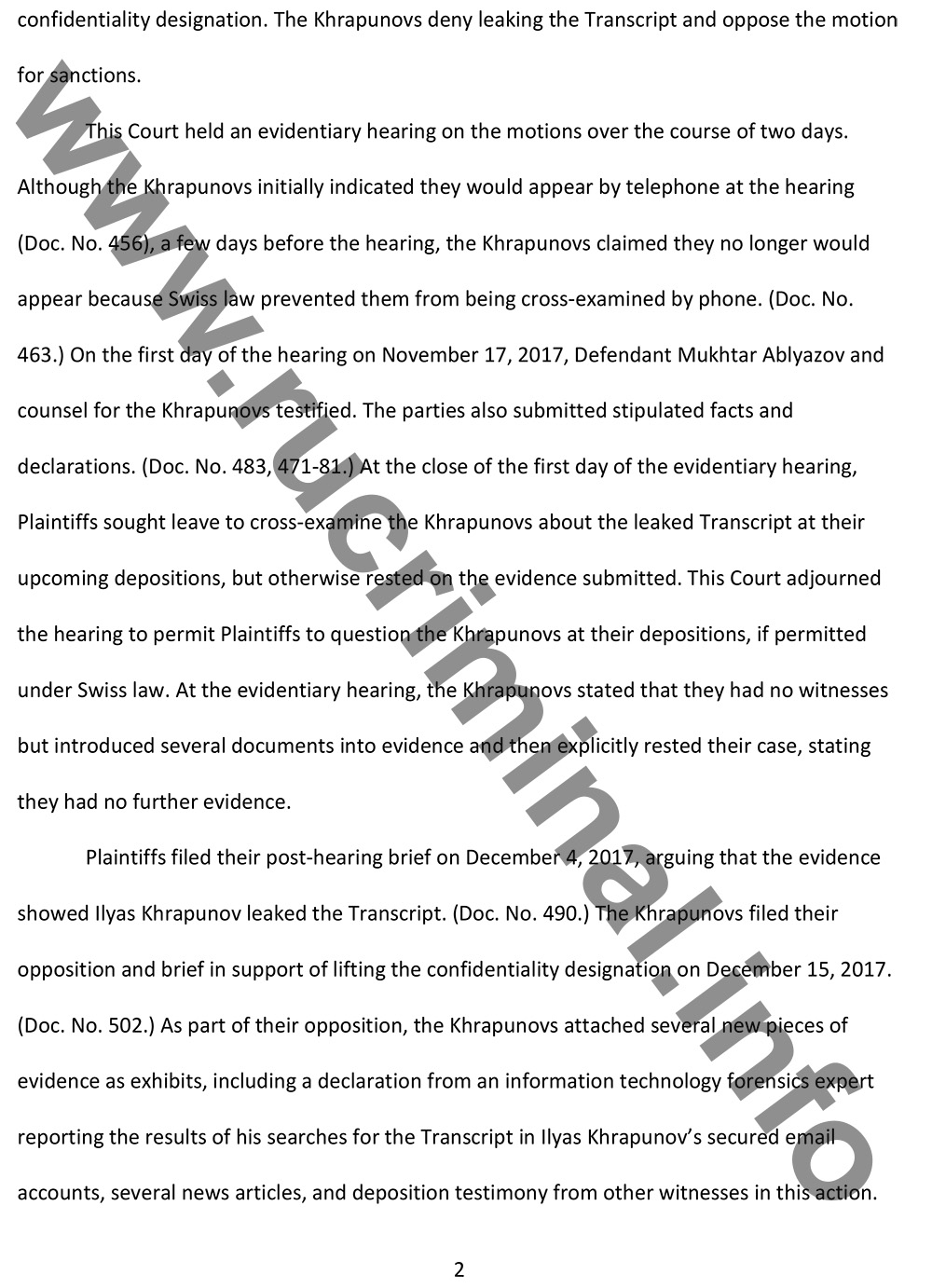 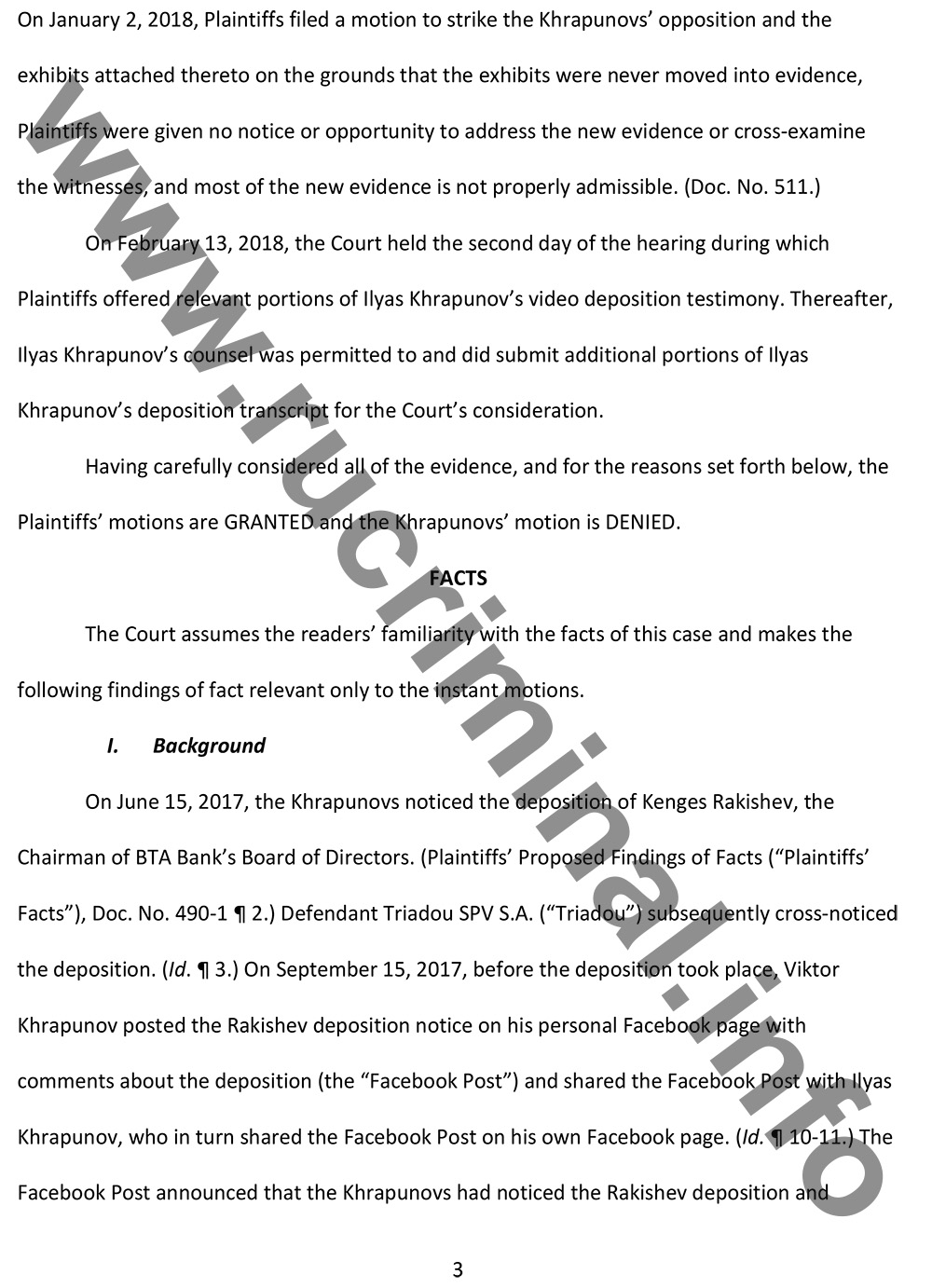 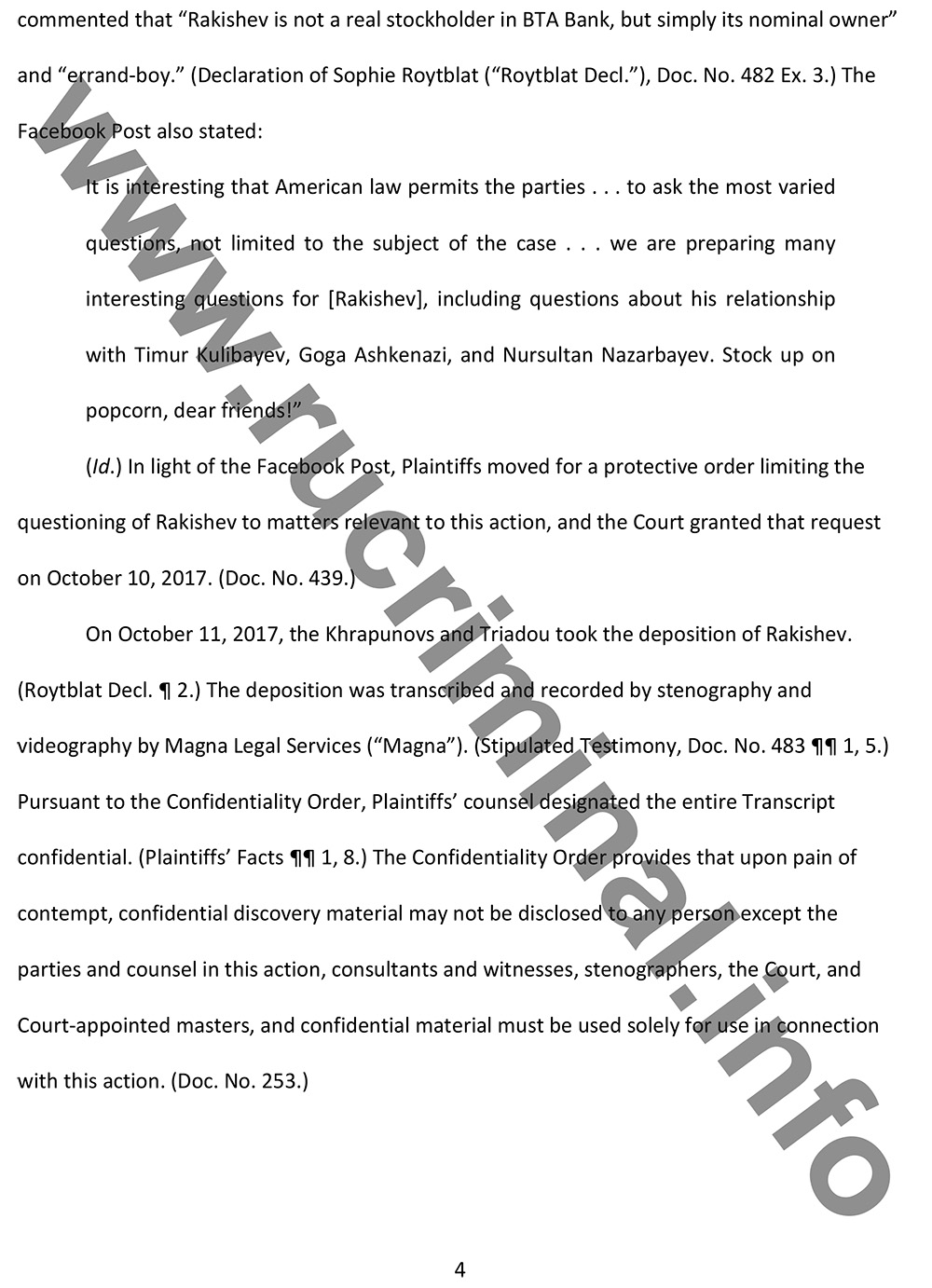 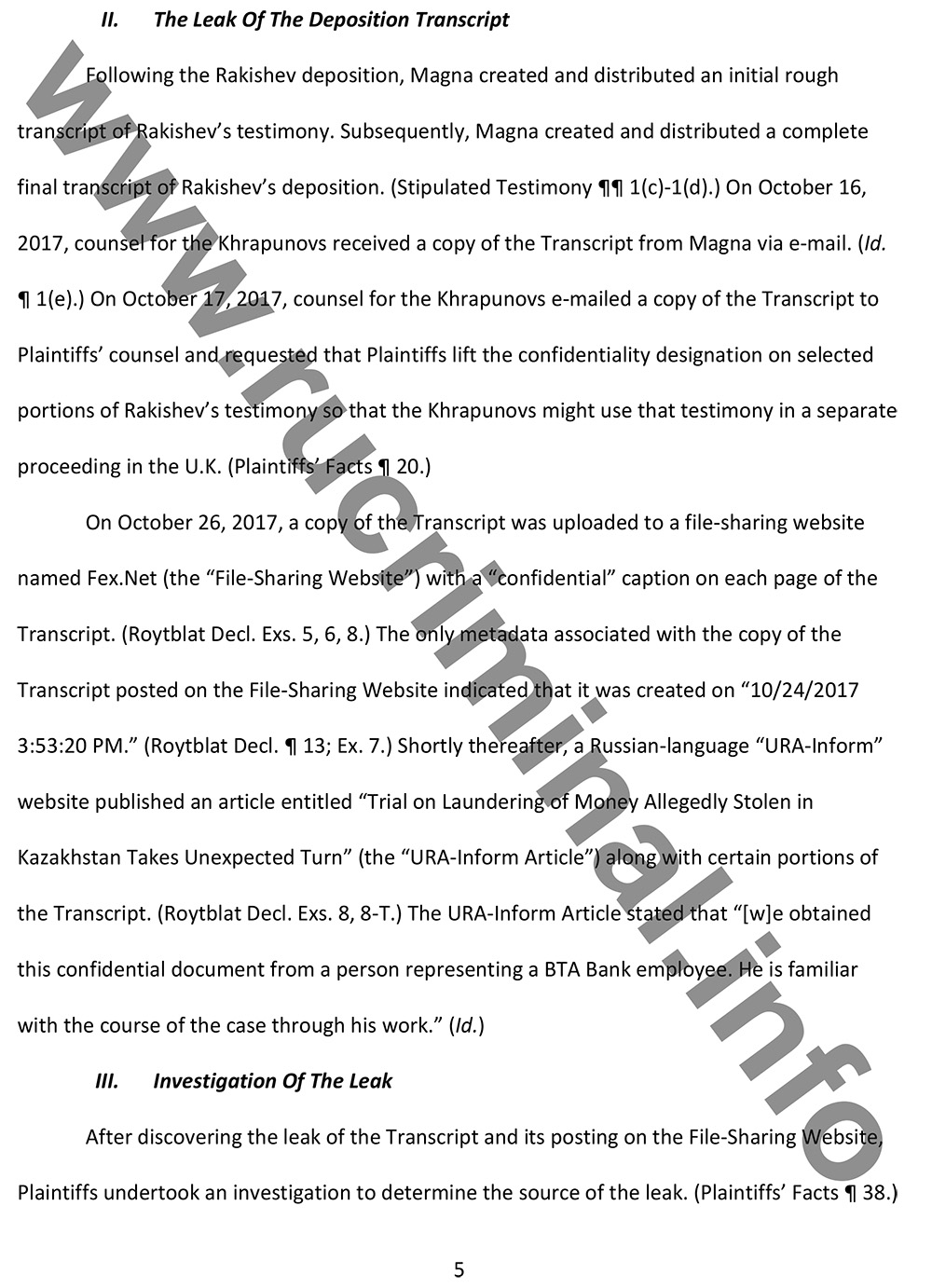 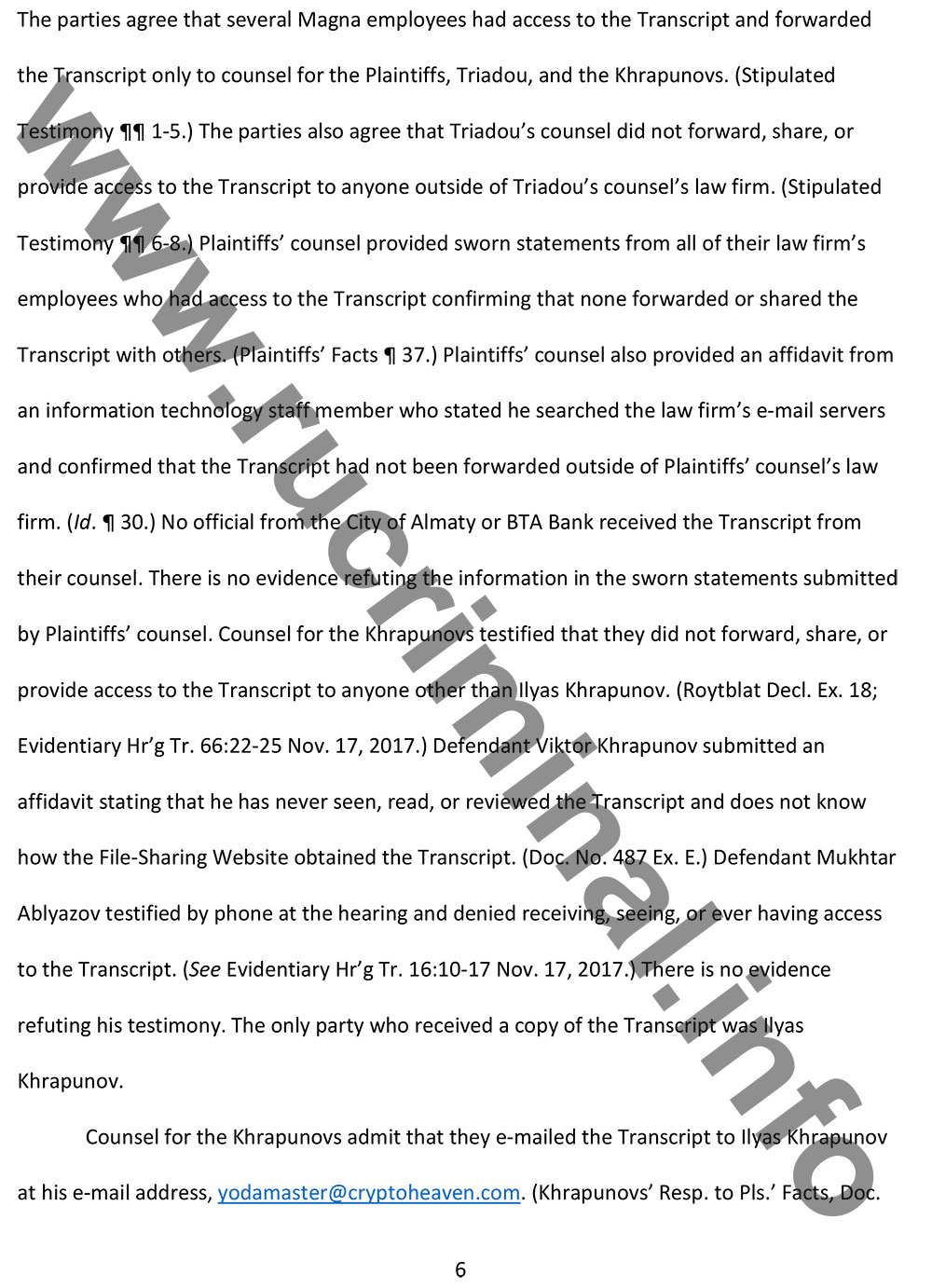 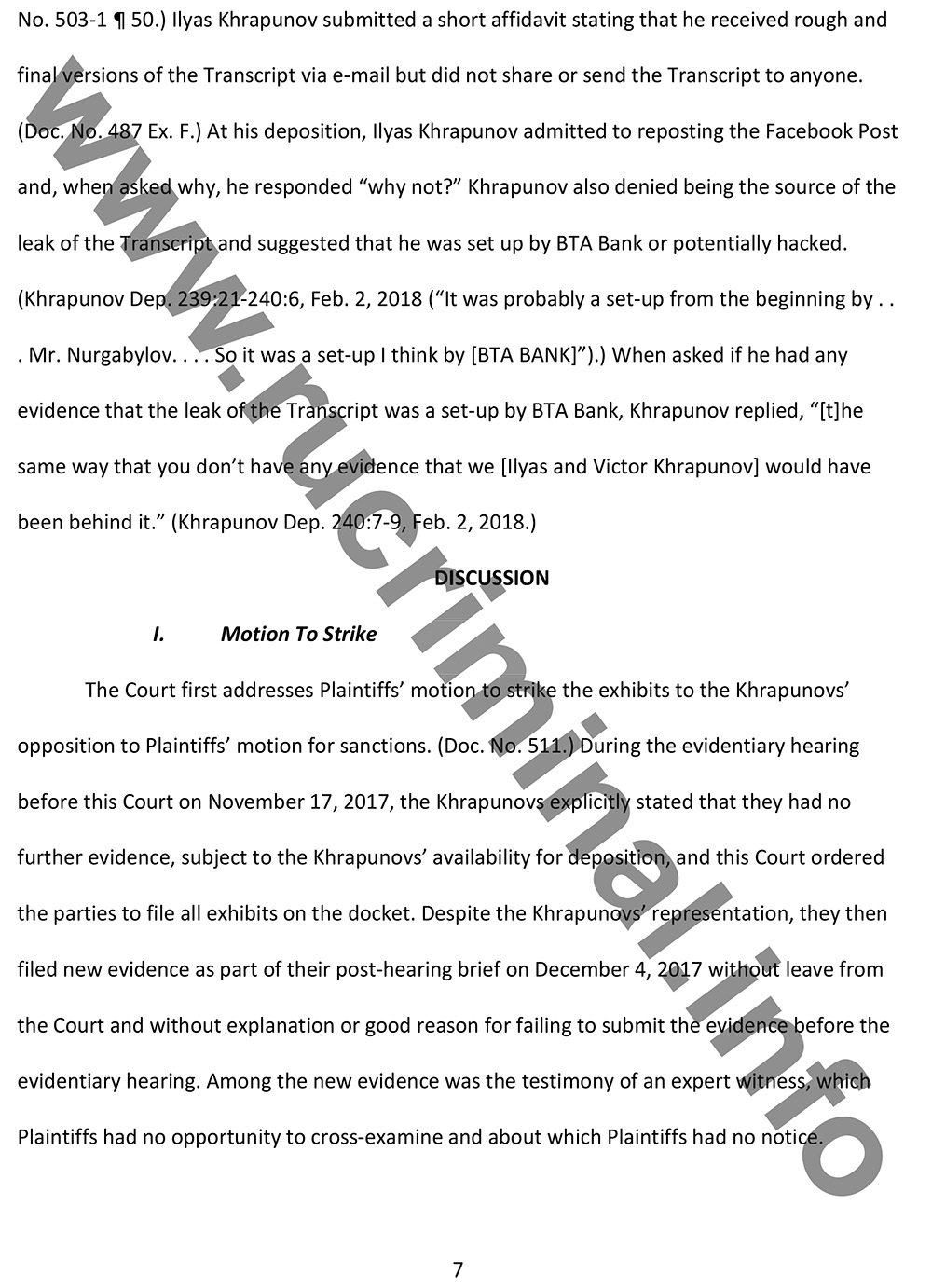 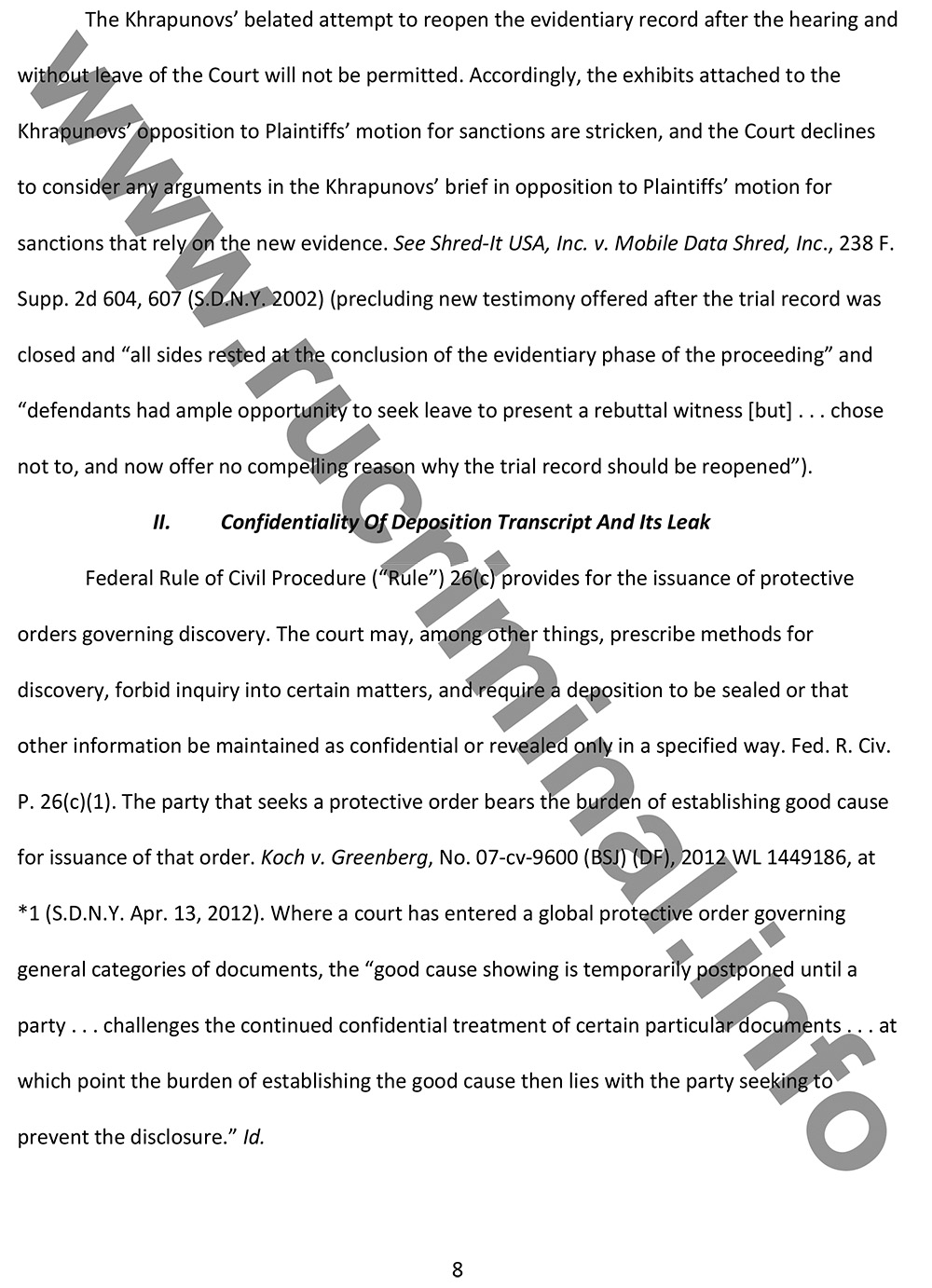 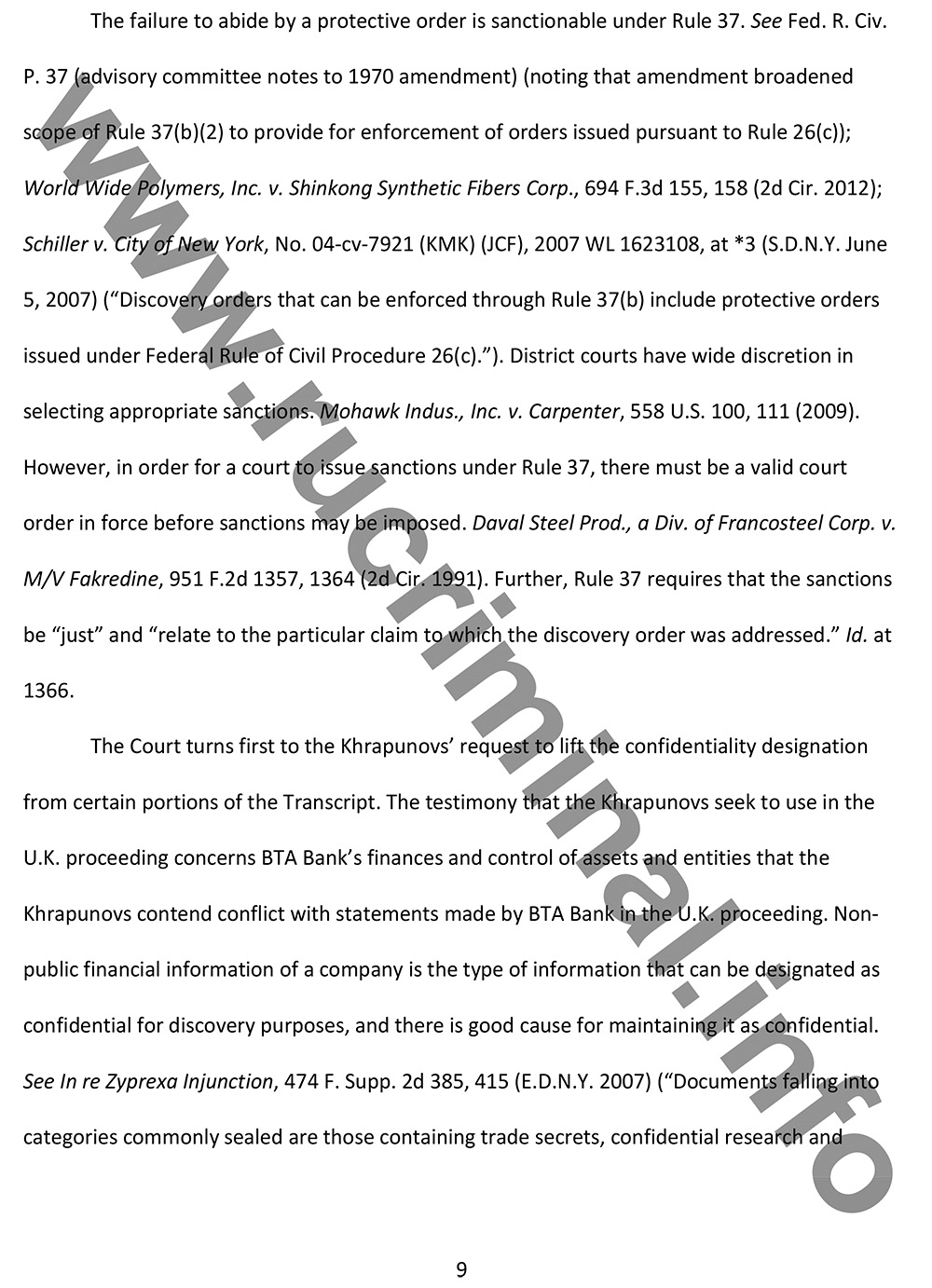 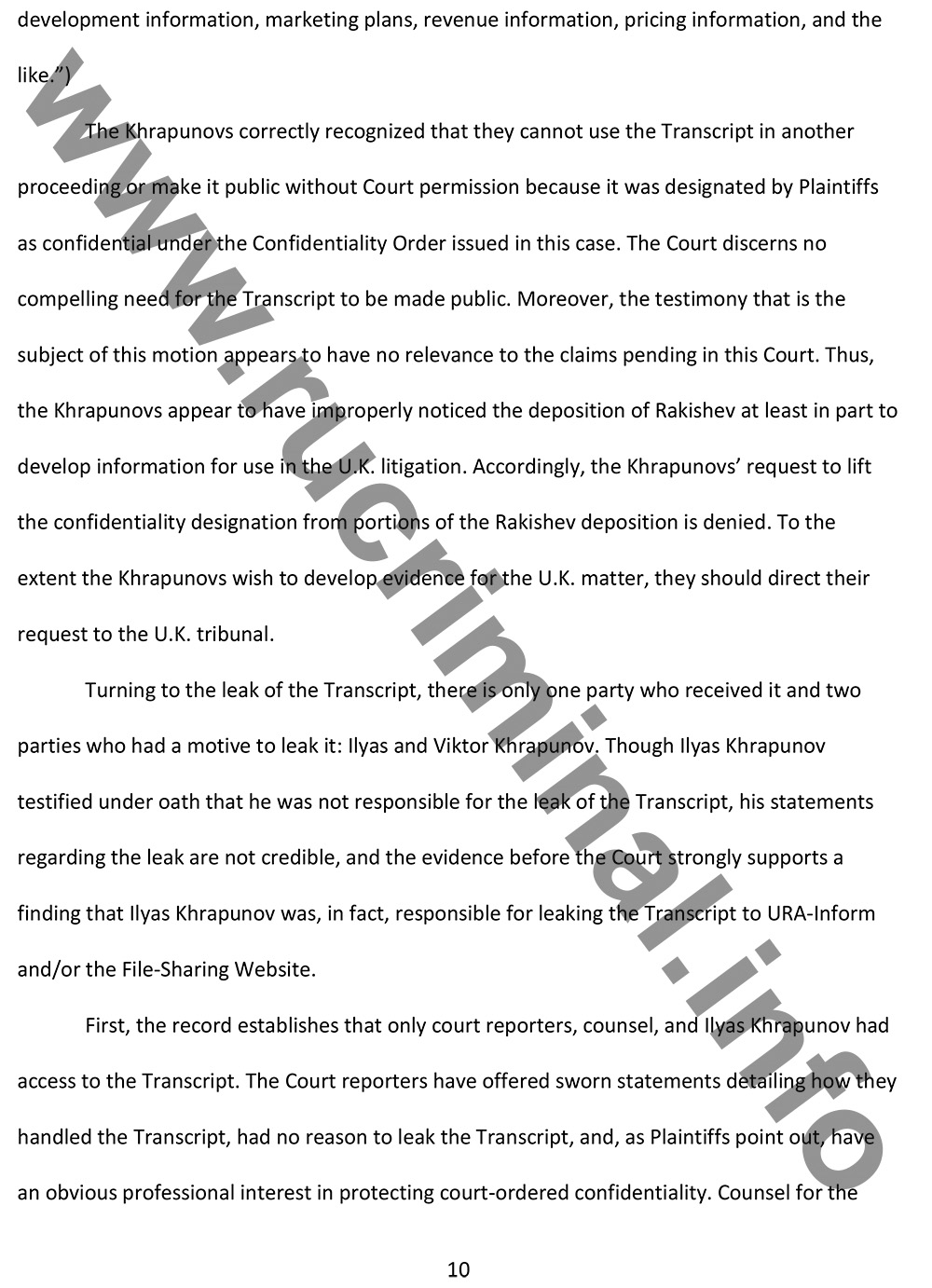 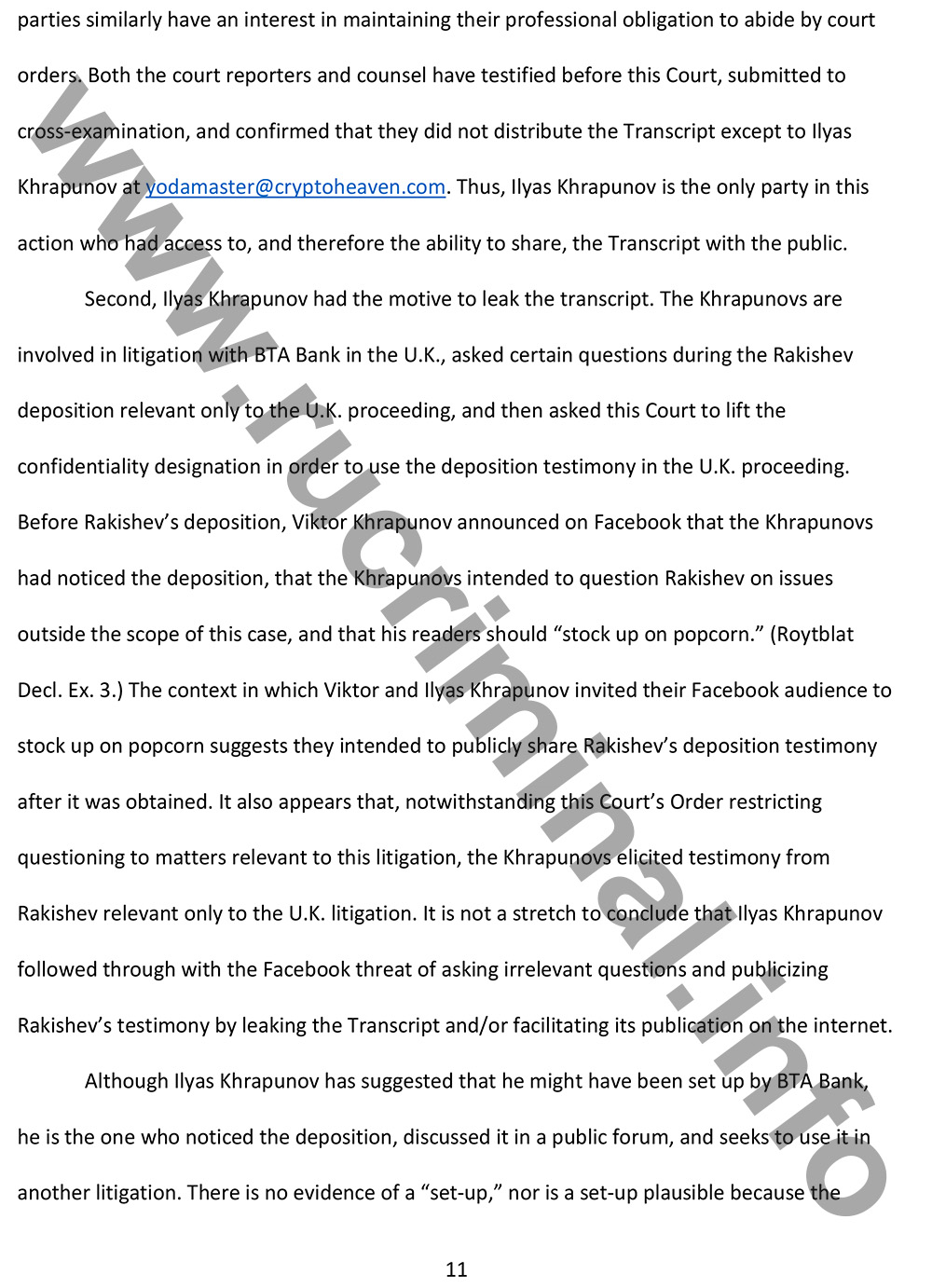 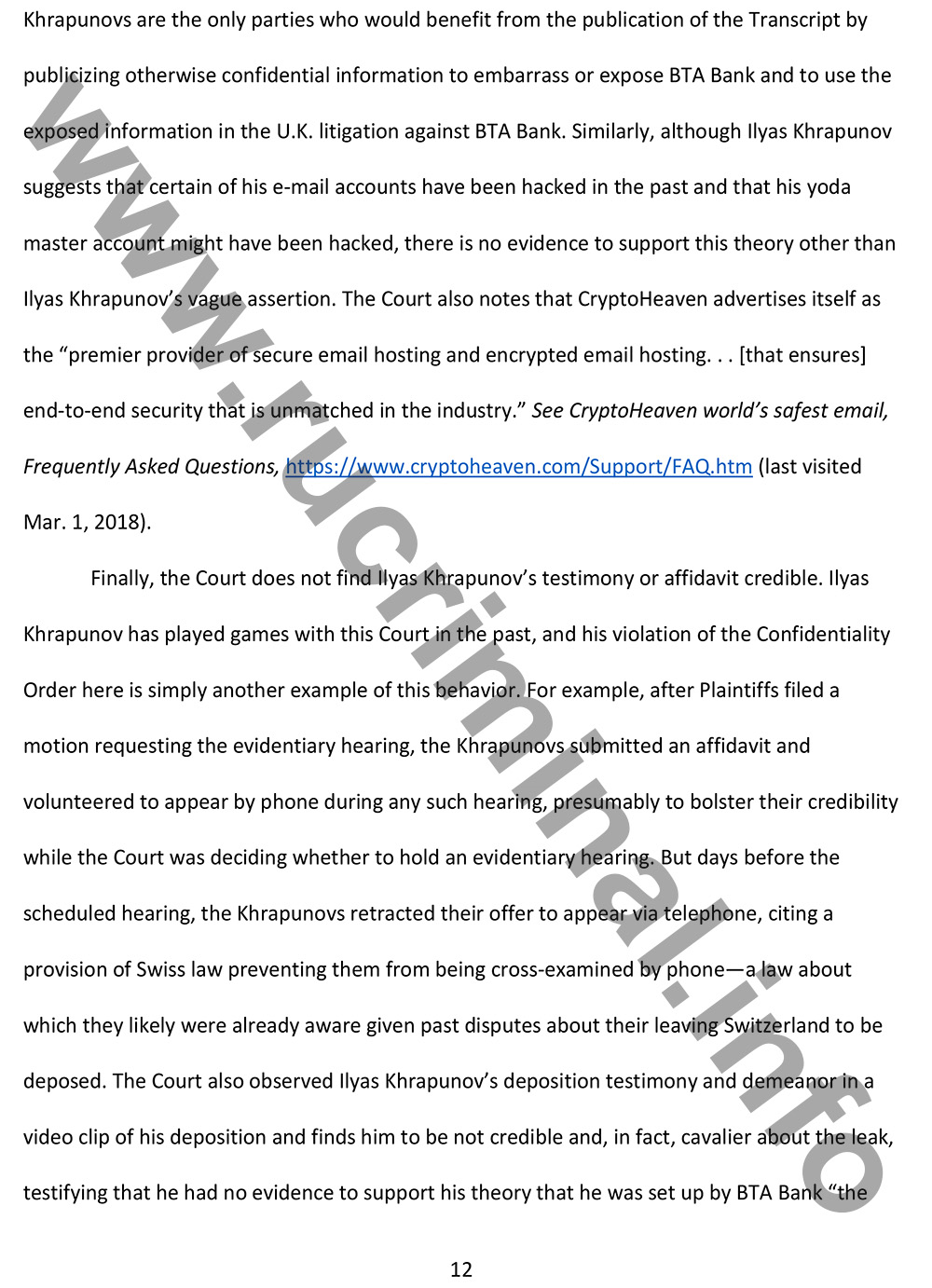 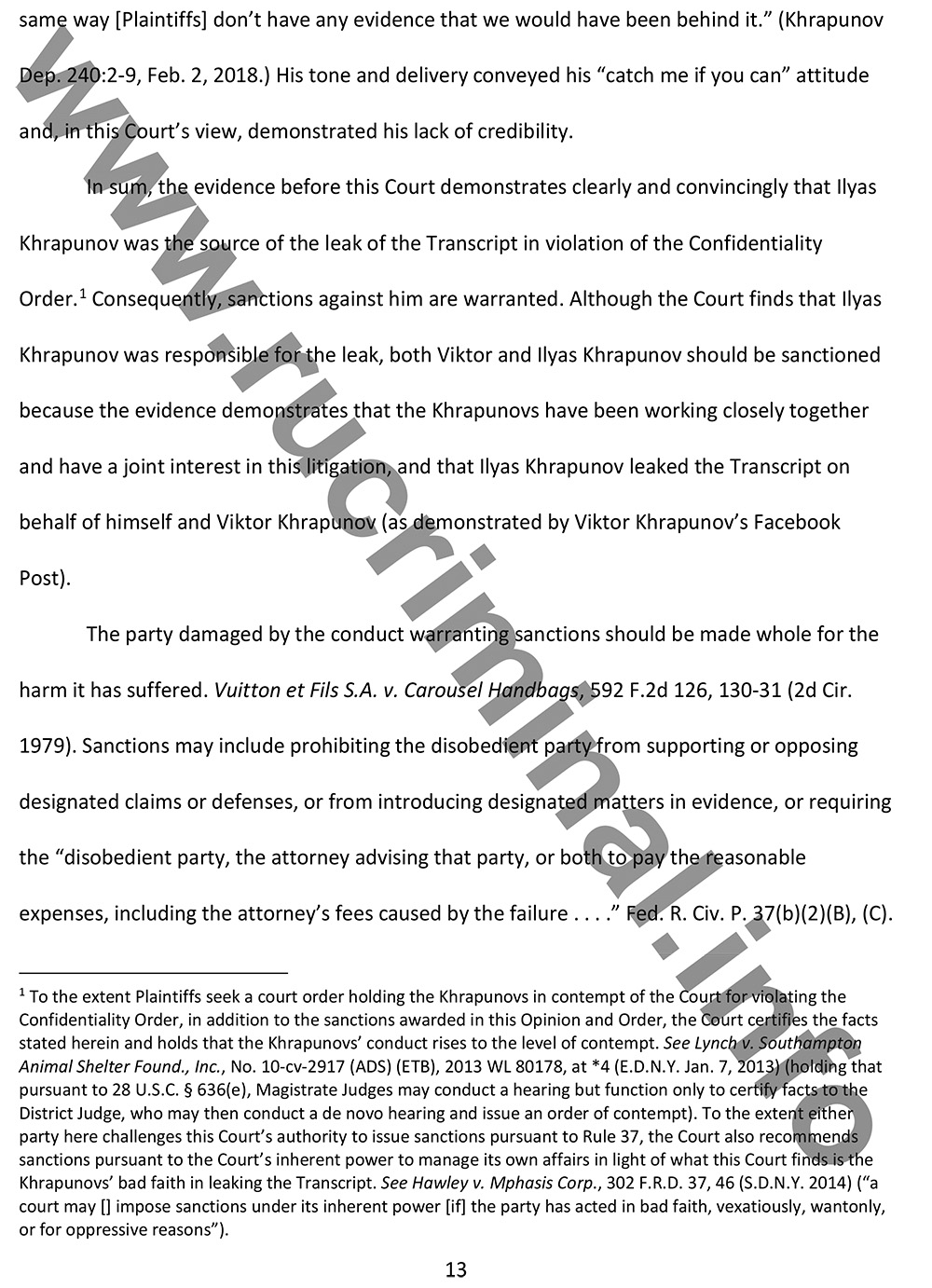 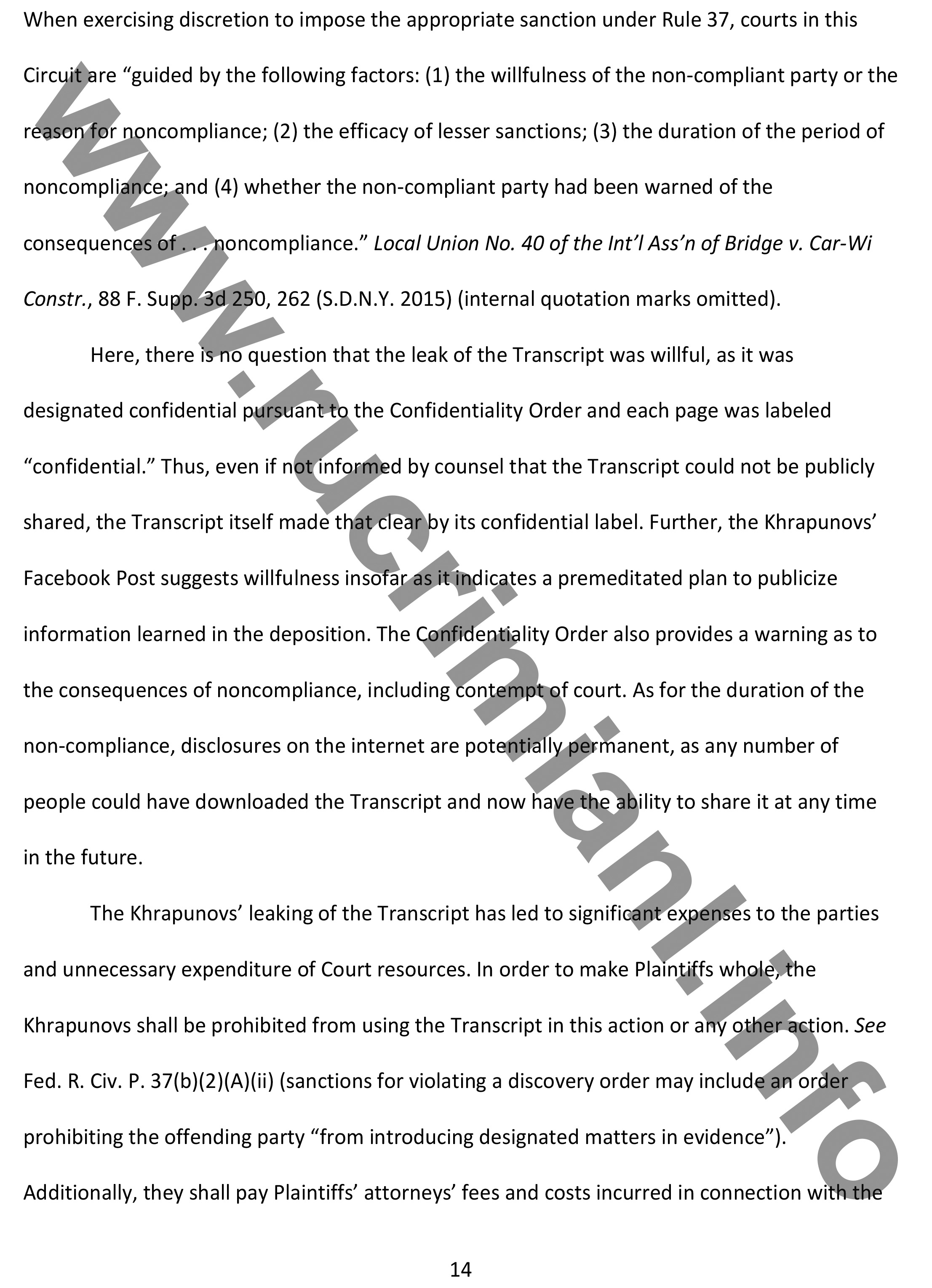 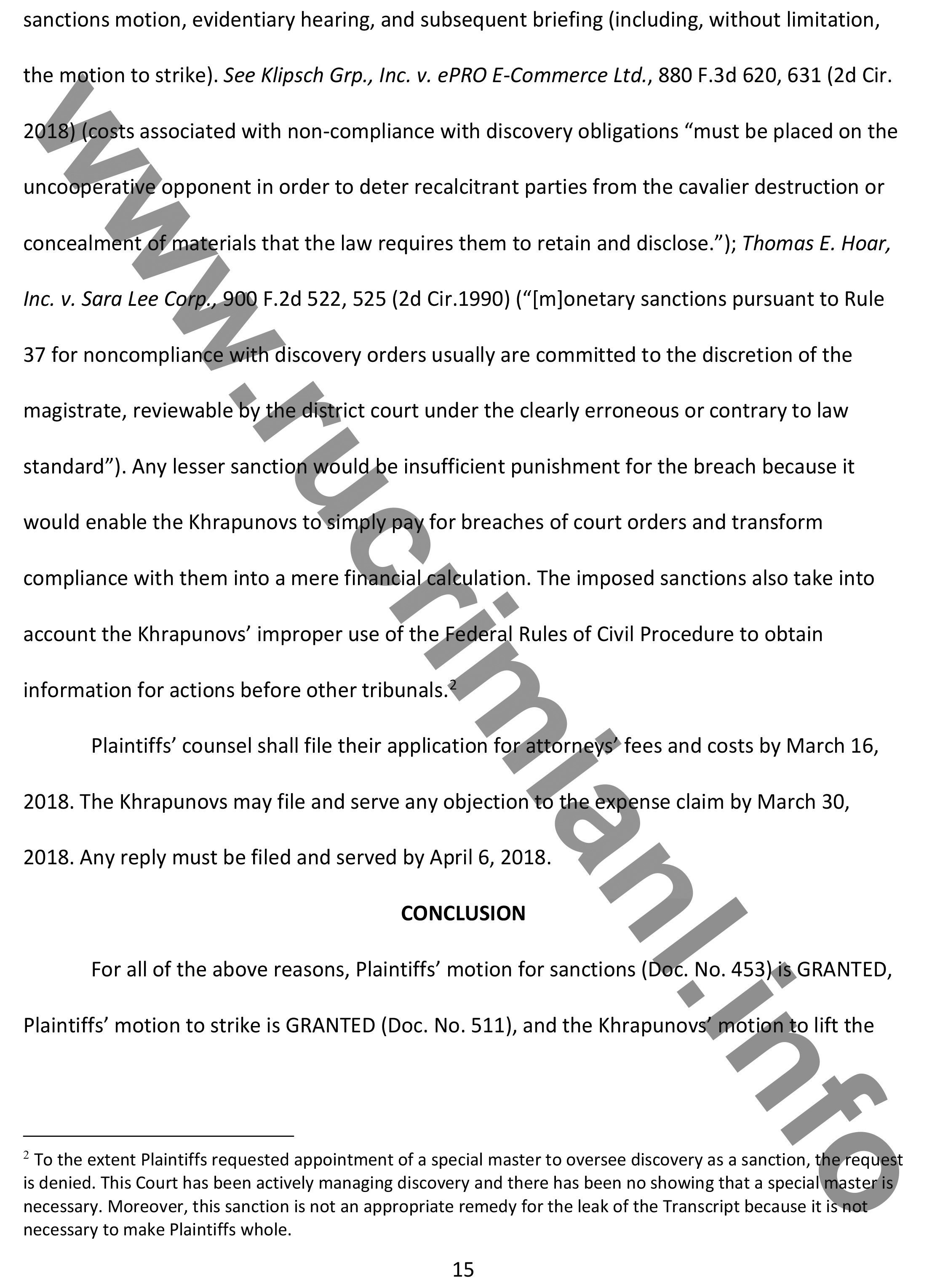 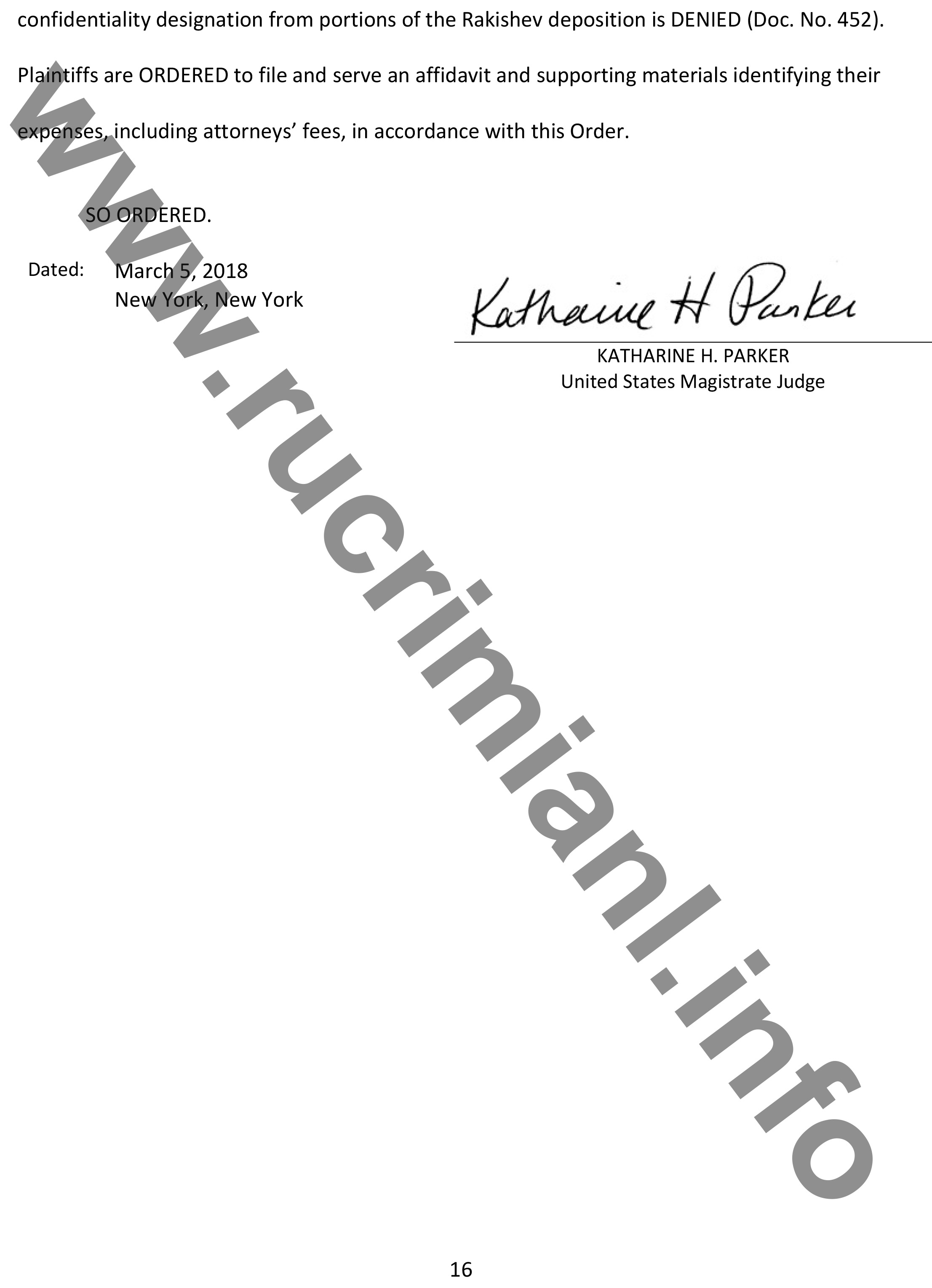